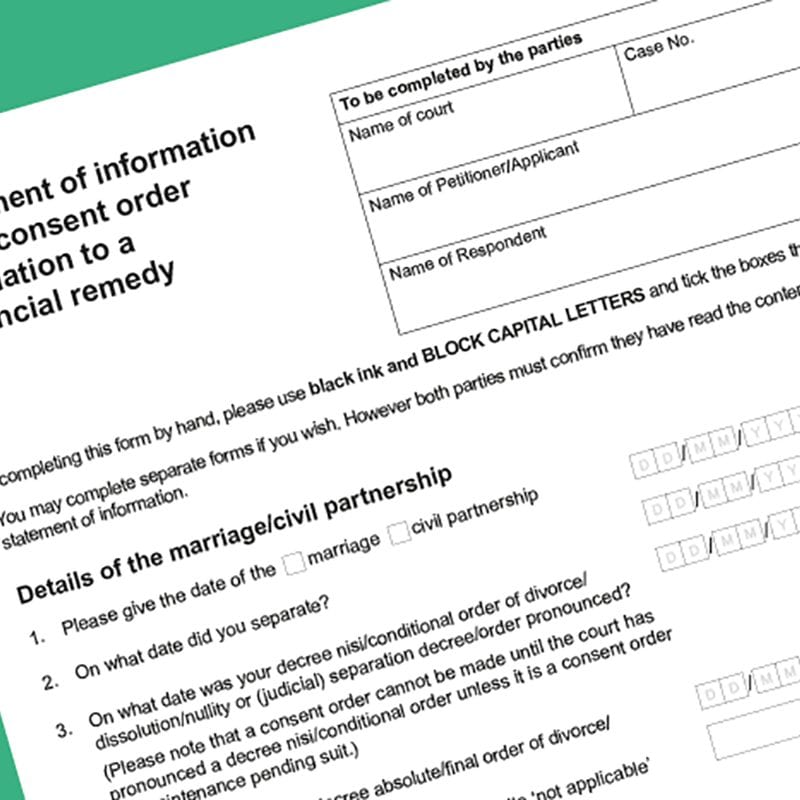 A new D81 form (Statement of information for a Consent Order in relation to a Financial Remedy) has now been issued by HM Court and Tribunal Service that is required to be used with immediate effect.

If you have used the earlier version of that Form (version April 2012) the Financial Remedies Court will continue to accept consent orders accompanied by that old form provided it has been signed no later than Friday, 18 February 2022.

As before, not every divorce or separation requires the Court to be employed to resolve financial matters arising from the breakdown of a relationship.

In many cases, a financial consent order is often prepared which sets out in writing how the parties have agreed to their financial assets and holdings to be divided between them and so settled. A financial consent order is an order made by a Judge usually in divorce proceedings, where both parties have agreed who is to get what and when from the financial assets available and which then records their consent in a written Court Order such as to then avoid any Court hearing.

The Consent Order itself is simply a written document which sets out the terms and conditions that the parties are in agreement upon and explains to the Court and to any other who might then see it how the parties intend to split the assets upon separation. The Consent Order can also include provision for spousal maintenance and or then child maintenance payments, and in many cases, will provide for a “clean break”, severing all future financial ties following the making of the Order.

As the name implies, the Statement of Information form provides the Court with certain information relating to then your respective financial positions as at the time of the proposed making of any Order.

When the application for a Consent Order is made, the documents are sent to the Family Court and ultimately then placed before a District Judge who then has to consider whether the proposed Consent Order is “fair” before the Order can be approved.

To help the Judge then determine the question of whether the proposed Consent Order is fair in all of the circumstances, the Statement of Information form is duly completed and sent with any application; without that form, the Judge cannot make any Order as he or she cannot satisfy themselves that the arrangement being entered into is a fair one and so the form is essential to the process being complied with.

From experience, many separated couples can be reluctant to voluntarily share their financial information, especially so if they have lived separate and apart for some time before contemplating settling matters via a Consent Order later down the line, but unfortunately, there is no way around this requirement and the information provided and used on the form must be true and accurate as at the time the form is signed and both parties have to sign the form to say that they have seen it fully completed by the other person. There is no way around this and if later it is found that you have falsely stated your true financial position, then any Consent Order made on a false pretence is capable of being challenged and so might not be worth then the paper it is printed on.

Many clients also worry that when a Judge sees the Statement of Information and then the figures on the form that the Judge will not think that the agreement reached is fair and so refuse to make the Order as agreed on.

Either the agreement isn’t fair and you should reconsider the terms of the proposed arrangement, or it is fair because there is some other significant information which if taken into account would persuade the Judge it is as well. In many cases, a Judge will write to the parties and ask a question or two of the parties and ask for a reply via letter detailing then the rationale behind the agreement and the Judge may then in light of any reply, then make the agreed Consent Order or in certain cases, the Judge may list the matter for a short hearing so that issues can be discussed at such appointment. In the hearing, the Judge will either approve the Order applied for or not.

How can Prism Family Law help?

If you have any doubt about how to draft either a Statement of Information or then a Consent Order, then in the first instance, please contact solicitor Andrew Wraith at Prism Family law for more information on 0191 269 6871 or email Andrew.Wraith@prismfamilylaw.co.uk for help.

This document is for informational purposes only and does not constitute legal advice. It is recommended that specific professional advice is sought before acting on any of the information given.